Budova A, the construction of which was completed in 2002, underwent overall reconstruction in 2018 and became the new headquarters of one of the leading banks on the Czech market, MONETA Money Bank.

For the sensitive and functional renovations, the use of modern, progressive materials and technologies and the overall composition, Budova A received 2nd place in the prestigious 2018 Best of Realty Awards in the category of Reconstructed Offices.

The author of the original timeless design of the 9-floor office building (with 21,000 m2 of office space, 167 m2 of retail space, underground parking for 389 cars and two rooftop terraces) and the overall reconstruction is Atelier 8000. At first glance the façade, which is now made of smooth white coffers, underwent the most striking change. The front, facing Vyskočilova Street, is an overhanging glass façade with emphasised turquoise-coloured load-bearing steel constructions. Instead of steel ramps on the main street for disabled access, a glass elevator was built, which is also used by cyclists to take their bicycles to the first underground level. Removing the ramp led to a greater open space between the building and the new Brumlovka bus stop island.

Budova A can boast of a terrace on the 2nd storey and a rooftop terrace on the 6th storey with greenery and relaxation zones accessible for all the employees in the building.

1. A relax courtyard by Budova B

2. A Relax zone by Baar Park

32. Pedestrian subway decorated by a mosaic

Behind Gamma Building (next to Brumlovka Park)

1. A relax courtyard by Budova B

2. A Relax zone by Baar Park

32. Pedestrian subway decorated by a mosaic

Behind Gamma Building (next to Brumlovka Park) 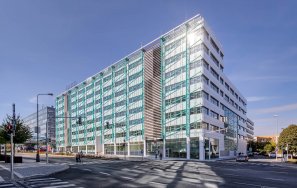 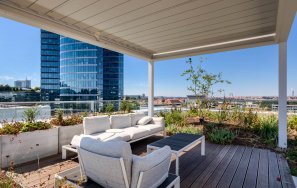 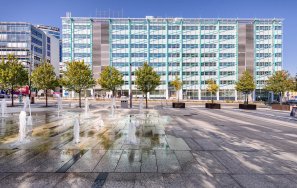 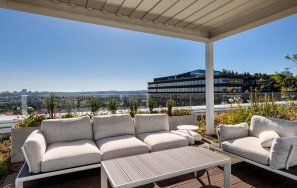 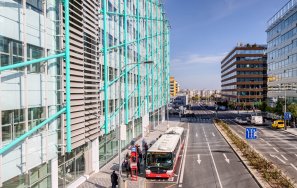