During these summer days, work on Rezidence Oliva's façade is gradually finishing, the internal wiring is being installed, the interior floors are receiving their finishing touches and the technology is being installed. At the same time, the construction of the neighbouring Olivka building is also being completed, where a new Czech-English private preschool Genius will be opening in September, complemented by new services for the public – public toilets or a café. The construction of a Swiss railway model train set over 100 m2 in size, which will be open to the general public in Olivka next year, is also being completed. In addition to the completion of the buildings themselves, the surroundings of these buildings are gradually being reconstructed and modernised.

During the holidays, the reconstruction and repairs of local roads and pavements, owned by the capital city of Prague, will be carried out adjacent to the Rezidence Oliva buildings. The repaired roads and walkways, together with completed paved areas, will bring a more pleasant, safe and sustainable public space to the site. Among other things, a bus stop will be connected with a new pavement along Michelská Street, a stone pavement featuring the Prague mosaic will be used instead of asphalt pavement and, of course, the existing greenery will be improved. The reconstruction of these areas is of greater scope, because it is necessary to ensure the required quality of the roads, which TSK will take into its administration upon the completion of the construction. At the same time, the current detour and bypass routes are marked in the site.

All development entails certain restrictions during construction. It is no different with this project. This mainly concerns traffic restrictions along the roads that are related to the different phases of reconstruction for residents who live there.

We believe that after the completion of work on the repairs of the public spaces in the vicinity of the Rezidence Oliva buildings at the end of August 2022, the scope and quality of the new roads and pavements will be so obvious that any discomfort at the time of reconstruction will soon be forgotten. 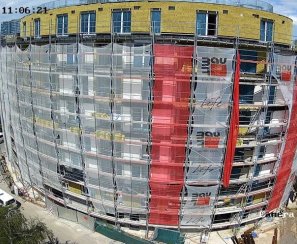